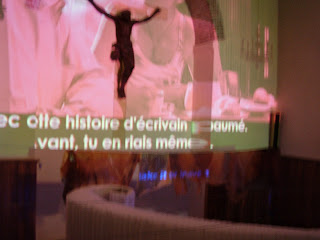 My “take it or leave it”  LED lighting interactive project, could be best translated as “immediatezza o rinuncia”©2006

An overview
Today the senses are weakened and lacerated because technology and progress make all processes dramatically explicit. Senses are neutralized and lose their capacity to discriminate.We need to reflect on that…and maybe work on ourselves.
I designed and set up this interactive polisensorial installation in a church. Upon entering the church, you are immersed immediately and find yourself viewing a court metrage by Ruben Garbellini called Breve Sogno projected onto the Choir. The reason why I decided to project the film on the crucifix,was because I meant to involve “Christ” in our worldly tormented life as well as in the life of the protagonists in the film. I specifically chose John Adams’“The Grand Pianola Music” as the background soundtrack, with its syncopated rhythm to emphasise the dramatic context of our lives today, and that of the film’s protagonists, in particular. I purposely added a pink filter on the film projection in order to focus on life’s duality “la vie en rose” on the one hand, and the contrasting theme of the plot which is sad. My intention was to emphasise that, despite life’s solicitation, every individual can dream of some “vie en rose”! With the film’s soundtrack muted, the spectator is directly exposed to the feature film’s dramatic tone which is distinctly attenuated by the pink filter simulating “la vie en rose”. 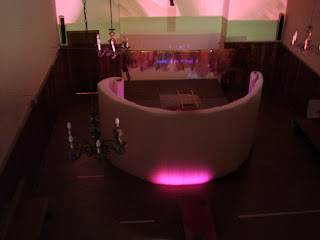 Another visual impact comes immediately from the soft white wall that surrounds the choir thus creating an added sense of privacy and at the same time records the feeling of a confessional zone. I wanted to draw attention on that instant of expectation, meditation that precedes confession. A momentous “alone with oneself and one’s thoughts”. The intention was to provoke moments of reflection on the part of the visitor without any kind of technological interference.
The atmosphere of the church left semi-dark emphasizing the mesopic aspect, with dimmed LED lighting. The visitor proceeds to find out what is behind the white (RGB LED lit) wall. There, behind that wall, an experience awaits to be lived.

The moment the visitor sets foot on the purposely-designed platform, the LED lights embedded in the platform light up and trigger a dialogue on the provided headphones.
In this dialogue a man and a woman simulate intimacy although they have only just met… At the end of their three-minute conversation we find out that they have met each other only twenty minutes ago… –Aliki Polydor | copyright 2006

Get the Flash Player to see this player. 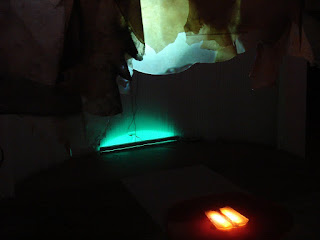 Every time a new participant steps on that platform, all the senses awaken: from the visual (dimmed LED-lights), olfactory (real clover scent diffused through a remote controlled compressed air system), to the tactile and auditory (dialogue between the man and the woman)In this sensorium– – the consumed senses-represented by five straps of skin-like textures—mask partially the view of the real world of relationships, that of the protagonists in the film of which the spectator hears the authentic dialogue this time while watching the same extracts privately within the soft wall confessional, and so it goes…
Aliki Polydor©2006